Just thought I’d let you know our yarn bombing exploits have reached the dizzy heights of the local press. Yarn bombing, is it vandalism? Vote below…

I’ve had a really long day and I have just got back from this evening’s yarn bomb. I’m so tired I can’t face a detailed post but I wanted to chuck up some pictures. Huge thanks to Carina who at very short notice made and sent from Germany 100 flowers! Carina, please link your blog in the comments, I promise I will link properly when I do a write up.

Last week I had a very lovely freelance journalist called Ruth Stokes came all the way out to the sticks to see me and have a chat about yarn bombing for a book she is writing on alternative activism. She wanted to see me in action at quite short notice. I didn’t have anything planned so had to come up with something quick and easy. You know they are my watch words!

I decided to do some sort of writing with strings of single rows of crochet that I could tie around a fence, something suitably twee and uplifting… 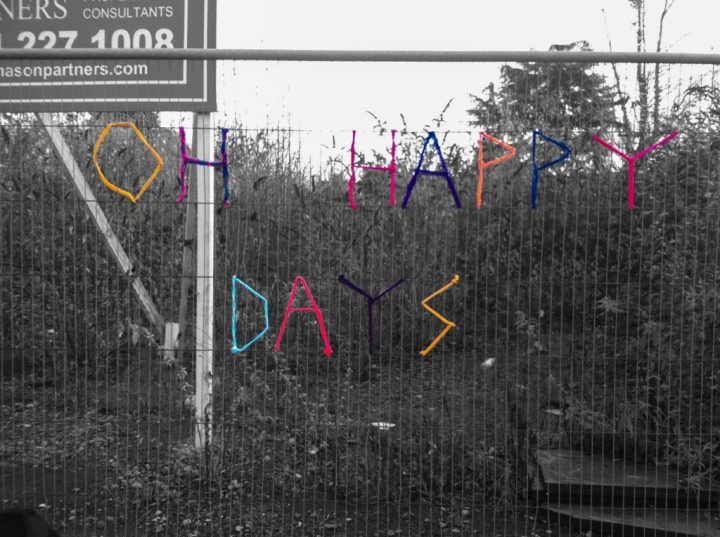 I made sure Ruth got her hands dirty too! We managed this in about 20 minutes while poor Iris looked on bemusedly from her buggy, pacified with Pom Bears and Milky Way Stars. When I did my interview on R4 last week they asked why I do yarn bombing. There are many reasons but this one was definitely just to make people smile!

Just a quick post to show off the pics of tonight’s yarn bombing escapade. More details to follow… 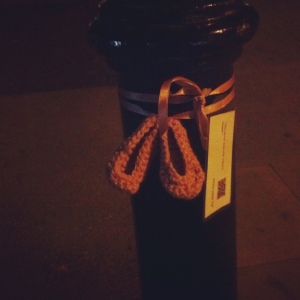 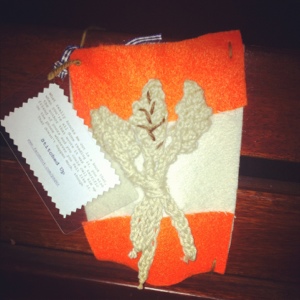 So, it’s about time I did a proper write up of Tuesday night’s yarn bombing. I’d been planning it for weeks, spending most evenings making bollard cosies and lamp post tags.

We have adopted the Montpellier Chapter as our den of iniquity. It’s a very “naice” place (originally chosen because it was the only place NOT showing the football). This was the second time we had been in there, crocheting away, the table strewn with wool. The waiter came in periodically, a faint look of bemusement on his face, but unfailingly polite. We finished up our creations there with a cup of tea. Actually Georgia was still sewing hers up as we were walking to our target!

Our initial target was a big public garden in the town. Wednesday was the start of the local music festival and all the festivals are based in this garden. Well, nearly all of them. We turned up at the gardens with nary a marquee or even a tent in sight. I quickly checked on my iPhone to see if I’d got the right dates. I had, but no mention of location. Stitch This suddenly had a brainwave that the music festival is usually held at the Town Hall. So we traipsed in the pouring rain to the Town Hall. “Are there even any bollards near the Town Hall?” I wailed, bollards being central to this yarn bomb. “There’d better be. I’ve just spent two chuffing hours on this train finishing this thing getting weird looks” replied Stitch This. Except she didn’t say “chuffing”.

Through an alley way and outside the Town Hall we found a bollard-tactic vista and got cracking straight away. It was getting late for us poor tired mothers of young children (sorry to ruin the mystique for you there).

It was lashing with rain, but it didn’t really matter. It just made things a bit awkward that we couldn’t put our bags down while we were sewing up. Instead we were manically running around, swapping scissors and yarn needles. 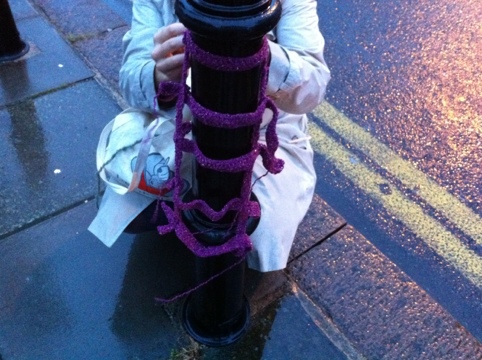 Most of the bollard cosies had been pre-sewn to make it easier to just slip them over but a couple still had to been sewn on as did the lamp post tags.

This was Stitch This’s first foray into yarn bombing and she was giddy with excitement. Her yarn bombs were a green sea creature closely resembling a head on a stick, and a magic wand with the words “Music is Magic” sewn on, and even some gold sparks! The wand was actually a mash up of some UFOs including a scarf of doom.

I ummed and ahhed over whether or not to add a tag. It seemed very self promoting and I thought it might ruin the air of mystery. However I put a lot of work into the project and it would be nice to have more visitors to my blog. In the end I did and I added a message saying that if people wanted to take the yarn bombs to please think about it and remember the yarn can be undone a recycled. I love yarn bombing, even if it has become less subversive and more ubiquitous. But the only slightly negative comment I have ever had was questioning the wastefulness of all that yarn, which was a good point. I have to hope that people who take the yarn bombs do so because they want them for decorative purposes, and if not hopefully my note will make them think twice.

All in all they made for a great sight. I haven’t actually seen them in broad daylight, but I have been updated by various Twitter observers that they are still in situ. The Cheltenham Town Hall staff were very pleased with them and have been tweeting about them and putting pictures on their Facebook page.

My new posse and I have big plans for the next festival, and we are going to keep meeting at the Montpellier Chapter (you think if I mention them enough times they will give us a discount?) so watch this space…

Happy Fourth of July everyone! Georgia decided to celebrate America’s independence from England by helping me yarn bomb. I taught her to crochet about a month ago and look what she made! 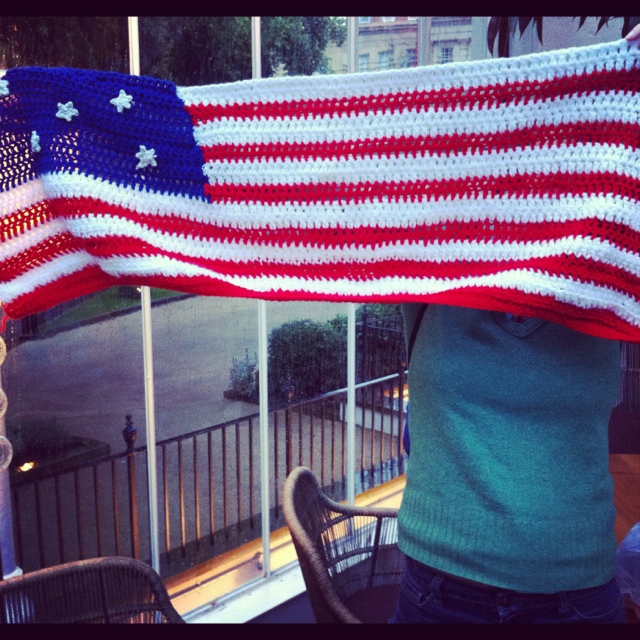 This is the first thing she’s ever crocheted! What a star (spangled banner)! 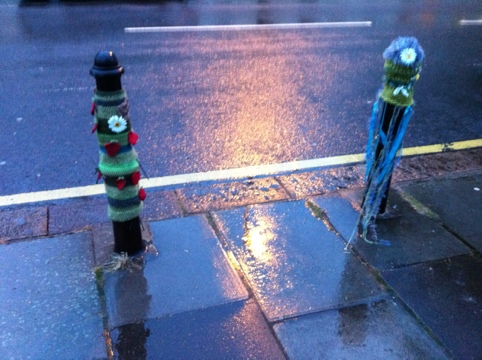 So, I’ve just got back from my yarn bombing. I’m wet. Very wet. And it’s late (well, it’s late for me!) so this is just a quick update. In the end my posse consisted of me, Georgia and Stitch This, and later Georgia’s friend who came to see what the fuss was about and was commandeered into taking photos, while the rest of us dashed about furiously threading with needles, cheating with garden wire, and stepping in puddles. All in all we deposited 16 yarn bombs, large and small. The above is just a sample, I will try and get some better photos before they all disappear. 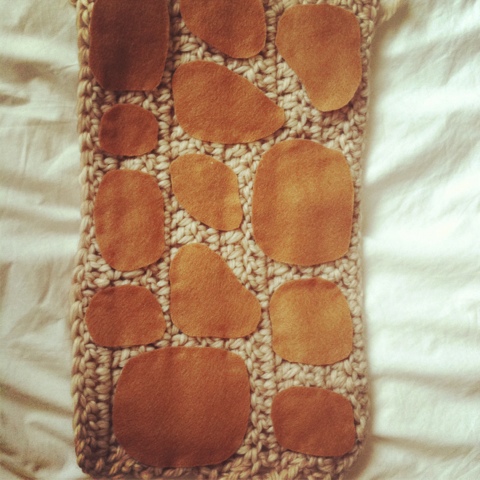 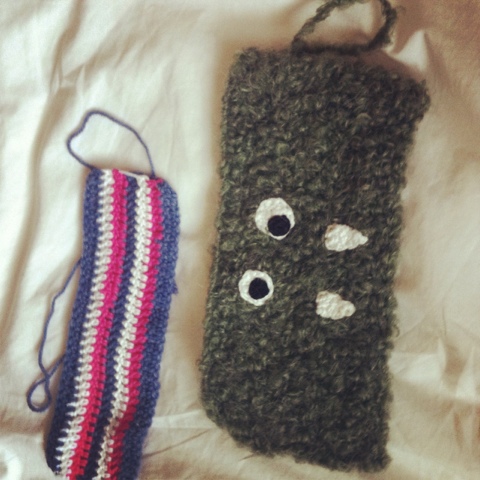 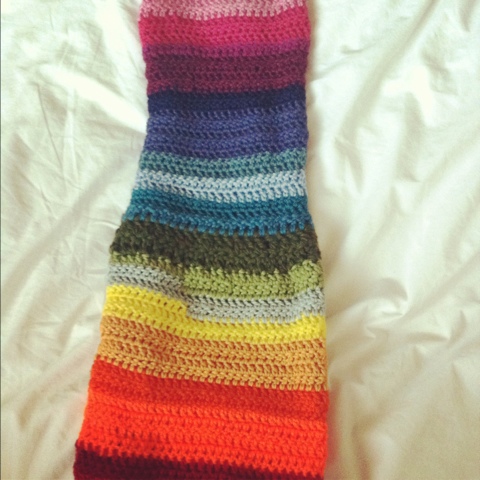 Tomorrow is the big Y day! I have a stack of crocheted goodness ready for public consumption, including the above. Be ready and waiting for in situ photos tomorrow…

Today is International Yarn Bombing Day, a day to spread a little cheer on lamposts, fences or other unattractive public spaces around the world.

Some people have quite a negative reaction to yarn bombs, thinking them pointless or untidy but I say what’s not to like? 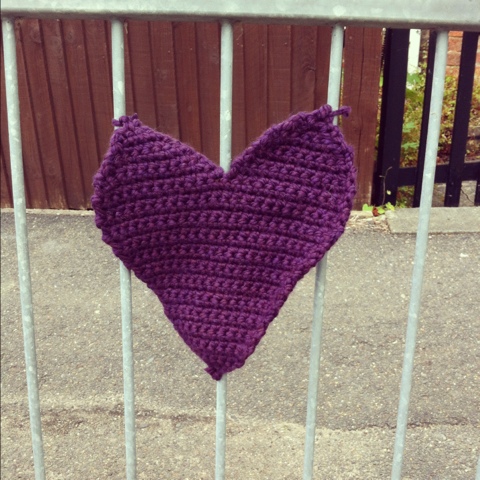